The 7th of April marked the opening of Artipelag’s major spring and summer exhibition with Edmund de Waal and Giorgio Morandi. Here, contemporary British ceramicist and author Edmund de Waal meets renowned Italian painter Giorgio Morandi, whose oeuvre largely consists of still life paintings of pottery. However it is not ceramics that unites these two artists here, but rather the encouragement of mindful viewing and contemplation.

Giorgio Morandi (1890–1964) is one of the great protagonists of modern Italian art. Morandi has assumed cult status, especially within circles of art connoisseurs, and has been called an “artist of artists”. Transgressing generations, Morandi has fascinated artists, authors, poets, designers and photographers alike and continues to do so to this day. Filmmakers and presidents can also be added to this list – where Federico Fellini’s classic La Dolce Vita is one of the more illustrious examples, as is Barack Obama’s inclusion of two Morandi paintings in the White House art collection.

To name but a few examples, Giorgio Morandi was showcased at Tate Modern in London in 2001. This exhibition then toured to Musée d’Art Moderne de la Ville de Paris the following year. The Metropolitan Museum of Art in New York also dedicated a solo exhibition to Morandi in 2008. Morandi has never before been substantially showcased in an exhibition in Sweden, nor in the Scandinavian region.

The exhibition at Artipelag highlights about fifty works from Morandi’s career. The very earliest works are from 1921 and the latest from 1963. A significant portion of the Morandi paintings featured in the exhibition are still life of ceramic household items and there are also a handful of landscape paintings included. The paintings are complemented by drawings, etchings and watercolours, which illustrate Morandi’s artistic range.

Morandi led a still and routine bound life. He rarely left his hometown Bologna, where he lived most of his life with his mother and three sisters. Morandi was also a Professor at the Accademia di Belle Arti di Bologna. His motifs are likewise recurring – where similar still lifes and landscapes constitute the vast majority of his oeuvre, well over a thousand oil paintings in total.

Edmund de Waal (b. 1964) is a British ceramicist, artist and author. To a Swedish audience, de Waal is mostly known for his best-selling novelwhich is currently translated to no less than 29 languages. In The Hare with Amber Eyes, de Waal explores the rise of his Jewish relatives to the social upper class in the late 1800s, as well as their subsequent fall inflicted by the ravages of the Nazis. In the international art world however, de Waal is known as a ceramic artist working in the borderland between craft and the genre-crossing aesthetics of contemporary art.

De Waal’s works have been exhibited at institutions such as the Royal Academy of Arts in London, Kunsthistorisches Museum in Vienna and Gagosian Gallery in London and Los Angeles. Last year he collaborated with contemporary Chinese artist Ai Weiwei in a project at Grazer Kunsthaus in Graz, Austria.

De Waal’s characteristic series of porcelain pots shifts the attention from each pot to their grouping as a whole, the created spaces between them and how the viewer’s gaze flows through the art work.

Artipelag’s exhibition is the first time that de Waal’s works are presented in Sweden and includes close to forty art works from 2012 to 2017. About ten of these works are new, stemming from a dialogue with the works of Morandi – de Waal has on numerous occasions emphasized Morandi as one of his greatest sources of inspiration. Furthermore, de Waal has produced a work directly on the gallery walls of Artipelag, relating to Morandi’s paintings.

The curators are Bo Nilsson in collaboration with Edmund de Waal.

Bus and Boat to the Exhibition

Introductions and Family Tours during July–August

Family Tour (30 min, in Swedish) – an introduction for both children and youth. Parents are welcome to join. Saturday–Sunday at 11.30 am and 1.30 pm.

All tours are included in the price of admission. Pre-registration is not necessary.

Alongside the exhibition, Artipelag has produced a catalogue with a preface by Bo Nilsson and texts by Edmund de Waal, Norwegian Art Professor Jorunn Veiteberg and Swedish author Fredrik Sjöberg. The catalouge is for sale in Artipelag’s design shop.

Edmund de Waal is current in Sweden, this spring, on account of two projects. Aside from the exhibition at Artipelag, de Waal’s book The White Road (Den vita vägen in Swedish) was published by Bromberg’s Publishing House on March 29th. In the book, de Waal focuses on the thousand year old history of porcelain and its journey from China to the rest of the world. The White Road has been featured in the The Los Angeles Times, The New Yorker and The New York Times, etc.

”One can travel this world and see nothing. To achieve understanding it is necessary not to see many things, but to look hard at what you do see.” 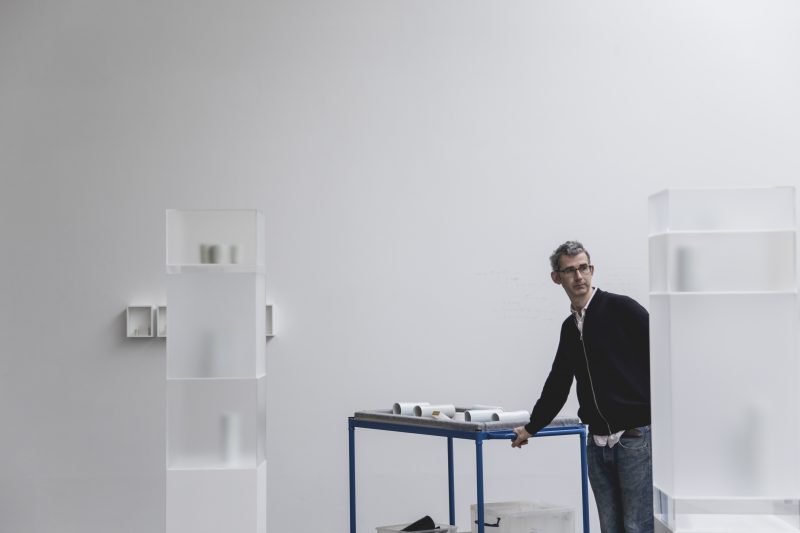 Follow the exhibition and everything about Edmund de Waal and Giorgio Morandi.
Read more