The exhibition Insect Insight features nine sculptural installations based on insects and is the work of Swedish artist Annika Liljedahl (b. 1946). Composer Lo Kristenson (b. 1991) has created a music experience consisting of audio tracks integrated into Liljedahl’s podiums, as well as a six-channel sound composition played from loudspeakers in the ceiling.

The artworks in the exhibition have been gradually emerging since 2016 and consist of hundreds of separate smaller sculptures. The sculptures and the music coalesce into an imaginative and enthralling holistic experience.

In Insect Insight, Annika Liljedahl revisits the aesthetic solutions that characterised her earlier artworks with partly different thematics. By using the insect as a metaphor for transformation and survival, she urges us to think about the insect, which is threatened by human impact on nature, even though we’re completely dependent on it for our survival. The installations depict frightening and sometimes disturbing situations in the insect world. Liljedahl’s insects are grotesque but also beautiful – just as they are in reality. They’re composed of materials that arouse conflicting emotions: fragile silk fabric meets menacing pins, lovingly sewn edges juxtaposed with crumpled wire.

The idea to work with Lo Kristenson was born when Annika Liljedahl heard her music in Helena Lopac’s radio documentary about the composer that was broadcast in the Meet the Musician series on P2 in 2017.

Lo Kristenson has been inspired by Annika Liljedahl’s idiom and approach to insects, where expressions of resistance, harshness and clumsiness co-exist with fragile delicacy and vulnerability. Both sculptures and sound portray the erratic (and sometimes unpleasant?) jerky movements, densities and thinnesses that are visible in an insect swarm, as well as the circularly repetitive shapes that we humans perceive in our top-down perspective when we look at an ant-hill. for instance. Insect Insight invites us to reflect on the right to existence, on the relationship between life and death, the unpleasant and the beautiful, belonging and exclusion, knowledge and imagination, humour and gravity. In the contradictory statements they make, the artworks engender insight that one is incapable of existing without the other.

The exhibition is on display in Artipelag’s Artbox.

”Seen as art, the Insect Insight exhibition stands out as one of the more interesting on this summer's cultural scene.”

On all the days that we’re open, our shuttle buses take visitors from Vasagatan in Stockholm to Artipelag and back again.
Read more >> 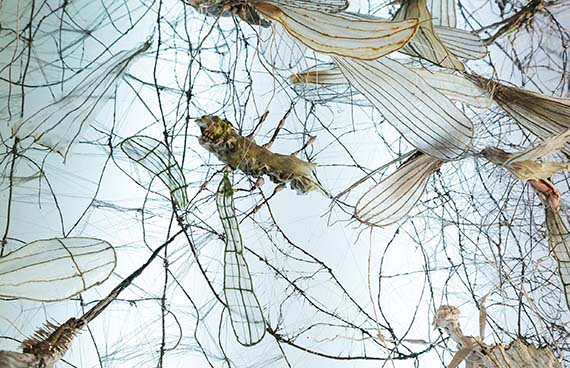 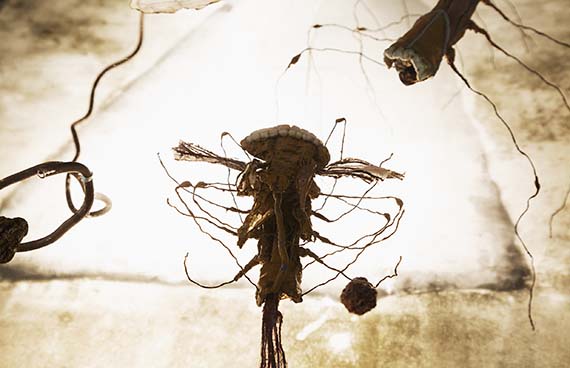 In a career spanning more than 50 years, artist Annika Liljedahl (b. 1946) has often depicted the vulnerable, fragile and delicate, and has exhibited in Sweden and internationally. She studied at the University of Arts, Crafts and Design in Stockholm between 1964 and 1968, and graduated in the textiles programme. Liljedahl combines materials such as silk, acrylic paint, electric cables, pins and rebars in an experimental and transboundary way. This results in everything from stand-alone sculptures to installations, scenographies, costumes, theatre performances and public art installations. Annika has had her own exhibitions at Gallery K in Washington DC, USA, Länsmuseet Gävleborg in Gävle, the Röhsska Museum in Gothenburg, Norrköping Art Museum, Borås Museum of Modern Art, Millesgården in Stockholm, Södertälje Art Gallery, Sundsvall Art Museum and Vida Museum & Art Gallery on Öland. Her work has featured in the Upplyst joint exhibition at Artipelag in 2013 and internationally in e.g. Korea, Japan and France. She is also represented at the Metropolitan Museum of Art in New York, the National Museum of Fine Arts in Stockholm, the Public Art Agency Sweden and the Gothenburg Museum of Art.

Lo Kristenson (b. 1991) was awarded her master’s degree in composition from the Royal College of Music in Stockholm in 2018. But she has already presented her work on established platforms for experimental music, such as Fylkingen in Stockholm, as well as the Sound of Stockholm, Nordic Music Days and UNM festivals. In 2014, she was one of the founders of the Konstmusiksystrar network, a women and trans separatistic organisation working for equality in the Contemporary Music scene in Sweden. In creative collaborations with Damkapellet, Vilde & Inga, Malvakvartetten and others, Kristenson questions norms and hierarchies and the impact of existing structures on musical expression. She explores circular and twisting forms in her music, and strives for a listening communication between musicians, the room and the people who happen to be there.

Article from Artipelag's annual magazine of 2019

Focusing on the fragile

The Insect Insight exhibition showcases the beautiful but frightening world of insects. Before it opened, we visited artist Annika Liljedahl in her studio.
Read more